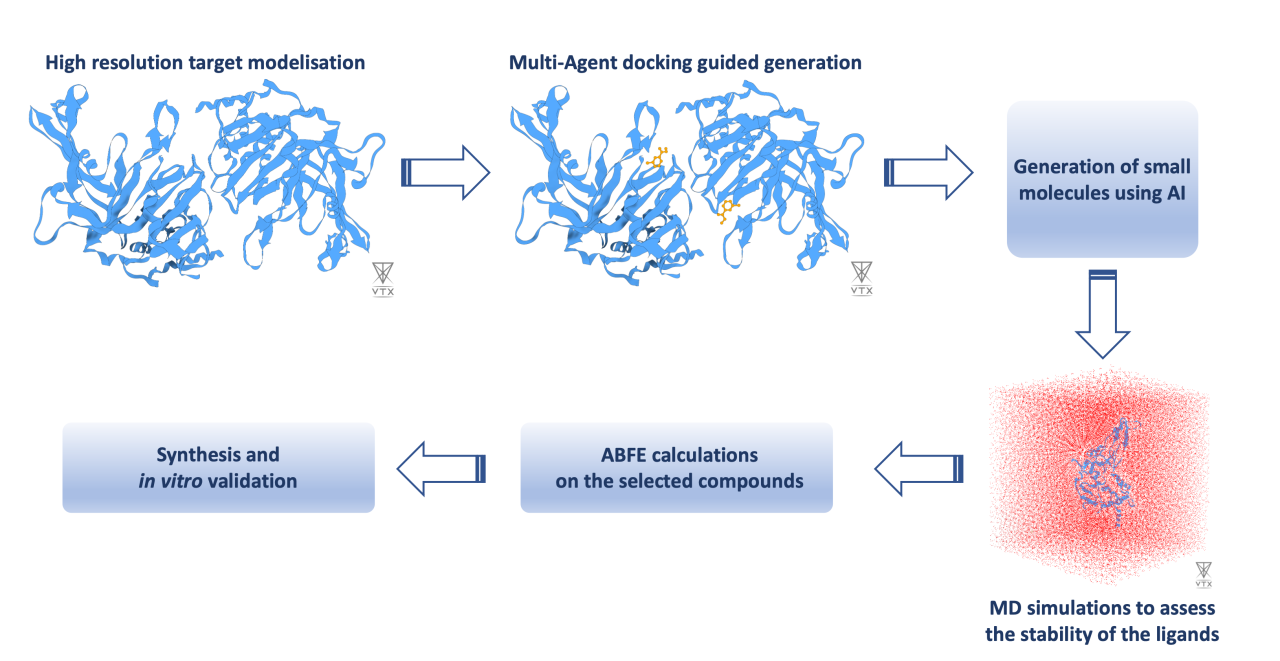 As time constraints and agility become crucial in the pharmaceutical industry, especially in the early stages of the drug discovery process, development of a consolidated and unified HPC framework paves the way for a major breakthrough. Such a framework will dramatically reduce the structure generation time, binding free energy calculation time, and computing costs, allowing faster delivery of a collection of optimally designed candidate drugs to their business partners. With this framework, we aim to reduce drug discovery time by 25% and costs by 20%.

The development of new drugs consists of two phases: Discovery and development. The discovery phase can be split into 5 steps: target identification, hit discovery, hit-to-lead, lead optimisation, and pre-clinical; it costs around €800m and lasts around 5 years. In the pharma industry sector, the discovery stage is often covered by specialised companies. While conventional drug discovery strategies (based on in vitro and in vivo techniques) have been successfully used to deliver drugs with therapeutic applications, these strategies are costly and time-consuming. Therefore, computer-aided drug design has emerged as a new in silico method for the discovery stage and many SMEs are competing in this field. The tendency is to outsource the research effort outside of pharma companies to contract research organisations. The SMEs Iktos and Qubit Pharmaceuticals, are part of this ecosystem and help many pharma companies advance their research projects.

Both Iktos and Qubit Pharmaceuticals offer services and products for the drug discovery stage: Iktos offers AI-based tools assisting with finding drug candidates, and Qubit Pharmaceuticals offers HPC-based computational tools to assess the quality of such candidates, i.e. predict the binding of candidates to protein targets. Iktos would benefit from more powerful computing resources for their product, while an approach combining the strength of both products would create a unique offering to the customers of both SMEs, particularly suited for hard targets, and would also considerably speed up and improve the process of internal drug discovery studies by Qubit Pharmaceuticals.

Qubit Pharmaceuticals and Iktos joined efforts to conceive a drug discovery strategy and toolchain aiming at reducing the cost and the time spent in the early stages of the drug discovery process, with a focus on small molecules targeting novel proteins. Iktos contributed their AI algorithms that generate novel molecules, and Qubit pharmaceuticals provided their high-end absolute binding free energy calculations that predict how these compounds bind to challenging targets. Using HPC, the combined technology sped up the drug design process and improves the quality of the generated compounds, thereby improving the entire drug discovery process and shortening it by 25%.

Using this new physics-based/AI-assisted workflow, ML algorithms can be trained using high-quality data from molecular simulations to understand protein target engagement that is not yet well described in the literature. This would, in turn, enable the characterisation of new pharmaceutical targets. Exploiting this new capability, the combined workflow was applied to a target that has resisted pharma efforts over the last decade: Ubiquitin Specific Protease 7 (USP7) involved in cancer pathways. Progress in the drug discovery stage for this target could lead to drugs for various kinds of cancer.  This pilot collaboration has already led to the design of entirely new compounds targeting USP7 and also improved each compound’s profile to pass several chemical properties, which will make it easier to optimise and accelerate the pre-clinical phase.

Iktos and Qubit Pharmaceuticals developed an in silico framework for drug discovery with the potential to cut drug discovery time by 25% and reduce overall drug development costs by 20%, which translates to savings of several million euros or potentially much more (depending on the actual steps covered). As time constraints and agility become crucial in the pharmaceutical industry, especially in the early stages of drug discovery, a new service offered through Iktos and based on this framework will be a competitive advantage in a challenging market, and represent an unrivalled product, especially for hard-to-drug targets, as demonstrated in the case of USP7 above.

Additionally, the novel hit families targeting USP7 already discovered during the project will support the partners' internal drug discovery pipeline and will be protected by patents. An estimated €2m will further be invested to bring these hit families to the pre-candidate stage. Having successfully reached that stage, the SMEs will be able to enter into a licensing agreement with pharma companies. Qubit Pharmaceuticals intends to use the new toolchain in further in-house drug discovery programs promising high profit by exploiting considerably increased success rates (40% vs 10%) enabled by the technology developed during the project.